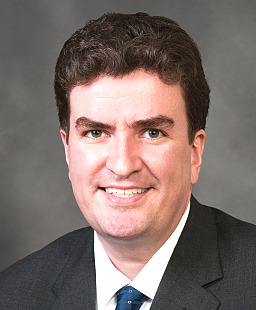 Kevin Patariu is a partner with the firm's Intellectual Property Group. Kevin litigates complex intellectual property matters throughout the United States and before the International Trade Commission (ITC), where he has successfully litigated several Section 337 investigations through trial. In Patexia’s 2020 ITC Intelligence Report, Kevin is ranked as the #2 Best Performing ITC Attorney Overall (Representing Complainants or Respondents) out of over 7,500 attorneys who appeared at the ITC between 2014 and 2019.

Kevin also has significant experience in patent post-grant proceedings before the U.S. Patent Office (USPTO) Patent Trial and Appeal Board (PTAB) which covers post-grant review (PGR), covered business method (CBM) patent review, inter partes review (IPR), patent reexamination, supplemental examination and reissue proceedings. Kevin is counsel of record for petitioners and patent owners in over 50 IPR proceedings, and argued before the PTAB in oral hearings. Kevin advises his clients on the strategic use of PTAB proceedings to meet his clients’ litigation objectives. In Patexia’s 2019 IPR Intelligence Report, Kevin is acknowledged as one of the Top 100 Most Active Practitioners Representing Petitioners at USPTO PTAB between 2014 and 2019, placing him among the top 2% of all IPR lawyers.

Kevin also has prepared and prosecuted numerous inter partes and ex parte patent reexamination requests, and successfully argued before the USPTO Board of Patent Appeals and Interferences (BPAI, predecessor of the PTAB) in connection with an inter partes reexamination proceeding.

In addition to his patent litigation and validity work, Kevin represents clients in trademark, trade secret, trade dress, and copyright disputes. Kevin also practices in the areas of due diligence and freedom to operate investigations, patent and trademark prosecution and counseling, preparation of infringement and validity opinions, and technology legal counseling for large and small enterprises. Kevin works with his clients to develop tailored legal strategies that achieve his clients’ business objectives in cost-efficient manner.

Kevin has litigation, patent prosecution, transactional, and engineering experience in a wide variety of technical areas, including:

Kevin is a licensed Professional Engineer (P.E.) in California. Kevin’s electrical engineering and software development experience gives him better insight on the merits of intellectual property issues and the business objectives and challenges facing his clients.

Kevin is also active in pro bono matters, and is the chair of the San Diego office pro bono committee. He was awarded the 2017 Perkins Coie Pro Bono Leadership Partner Award, awarded to one partner annually.  Kevin was also a recipient of the 2017 Patent Pro Bono Achievement Certificate presented by the United States Patent and Trademark Office (USPTO). The certificate, given to 85 individuals nationwide in 2017, is a recognition of individuals who help make the USPTO Patent Pro Bono Program available to financially under-resourced inventors and small businesses by preparing and prosecuting patent applications. He is on the San Diego Steering Committee for California Lawyers for the Arts, the administrator of the California Inventor Assistance Program (CIAP), a USPTO pro bono program in California designed to assist financially under-resourced independent inventors and small businesses with patent applications. He is also a member of the CIAP Advisory Committee and the office liaison with the California Lawyers for the Arts. Kevin is a Member of the Board of Directors of the San Diego Volunteer Lawyer Program (SDVLP), which provides free civil legal services to low income and disadvantaged San Diegans. Kevin successfully appealed multiple cases involving denials of Social Security Disability benefits for clients referred by SDVLP. In each case, the client was found to be disabled and entitled to benefits after a hearing before an Administrative Law Judge.

*The Supreme Court of Illinois does not recognize certifications of specialties in the practice of law and no certificate, award or recognition is a requirement to practice law in Illinois.