Perkins Coie consistently ranks among the top 10 law firms representing petitioners in inter partes review (IPR) and is one of the more experienced full-service law firms handling IPRs in the nation. Since the AIA became effective, our lawyers have assisted in more than 700 reviews before the USPTO.

IPRs first became available on September 16, 2012 with the introduction of the America Invents Act (AIA). Inter partes reviews allow a person, other than the patent owner, to file a petition asking the USPTO to review the patent’s validity. IPRs are beneficial as they offer an expedited, streamlined and cheaper alternative to litigation.

Unlike Post-Grant Reviews (PGRs) which allow patents to be challenged on all grounds, IPRs are limited to anticipation (35 U.S.C. § 102) and obviousness (35 U.S.C. § 103) challenges based only on patents and printed publications. Consequently, systems or products cannot be used as prior art in an IPR.

IPRs are trial-like proceedings conducted in front of a panel of administrative judges referred to as the Patent Trial and Appeal Board (PTAB). While IPR proceedings are directed to invalidating patent claims, they contain some features typically found in traditional patent litigation, including motions practice, expert declarations and depositions and other discovery issues.

As shown below, the IPR process is broken down into three phases: petition, discovery and hearing.

Inter partes review is requested by filing a petition at the USPTO. A petition must meet certain requirements, including all of the following:

1. Identifying the real parties in interest.

2. Identifying the claims being challenged along with explanations of grounds of unpatentability for those claims.

3. Providing a detailed explanation of the relevance of the evidence.

The petition may also include technical declarations with evidence and opinions supporting the petitioner’s arguments.

Within six months from filing, the PTAB reviews the petition and patent owner’s preliminary response (if any). The PTAB institutes a trial if it determines that there is a reasonable likelihood that the petitioner would prevail with respect to at least one of the claims challenged in the petition. In its institution decision, the PTAB may narrow issues, provide initial claim constructions and provide details regarding the grounds of unpatentability that will be at issue in the proceeding.

Upon institution, the PTAB issues a scheduling order that concludes the proceeding within 12 months. Pursuant to the scheduling order, a patent owner is granted approximately three months to take discovery of the petitioner’s supporting evidence and to file a formal response or motion to amend. The scope of document discovery is still evolving. However, depositions of declarants and, at times, other witnesses are allowed.

The petitioner is then granted a three-month period to perform discovery on the patent owner’s supporting evidence and to file a reply brief or present arguments needed to counter a proposed amendment. A short period for motions may be provided before the oral hearing. After the oral hearing, the PTAB issues a final written decision regarding the patentability of the challenged claims. Parties involved in corresponding litigation may settle during the preceding unless the PTAB has already decided the dispute on the merits. Both the patent owner and petitioner may appeal the PTAB’s final decision to the U.S. Court of Appeals for the Federal Circuit.

Below is a typical timeline for IPR proceedings:

Benefits of Filing an IPR

IPRs are often viewed as a strategic alternative to patent litigation for a number of reasons. First, the proceedings are much faster than any other federal court venue, with a final written decision issued within 18 months. Second, the IPR proceedings are adjudicated before a technically savvy panel at the USPTO, which understands the technology and the nuances of the patent laws. Third, the burden of proving invalidity before the USPTO is lower than the burden of proving invalidity in a federal court, making it easier to invalidate a patent. Finally, the claim construction standard at the USPTO is broader than federal court and again makes it easier to invalidate the patent.

IPR Timing Considerations and When To File

Perkins Coie lawyers help clients decide which approach for IPR is best in their unique situations. Anyone considering filing an IPR should know these important timing rules as described below.

On the other hand, if the patent being challenged was filed pre AIA, before March 16, 2013, an IPR can be initiated immediately following issuance since PGR is not available for these patents.

There is one major caveat to these filing rules. Anyone sued for patent infringement must file for an IPR within one year of the lawsuit being filed. This one-year timing window raises strategic issues that must be considered by a defendant before filing the IPR. Specifically, it is necessary to evaluate whether it is more advantageous to file the IPR earlier or later in the 12-month window.

For example, filing the IPR early guarantees that the decision to institute will be rendered before the 12-month deadline, potentially giving the defendant/petitioner a chance to file a second IPR on issues initially lost or by using the PTAB’s claim construction.

Alternatively, seeking inter partes review late in the 12-month filing time might allow a petitioner to take advantage of knowledge gained about the opposing party’s case, as it will likely have been presented already in the infringement lawsuit.

Finally, it should be noted that parties that previously filed a declaratory judgment action against the same patent(s) are precluded from filing an IPR.

A one-stop collection of insights and research on noteworthy decisions and practical effects for parties and attorneys involved with inter partes reviews.

How do inter partes reviews work in real life? Our brief guide breaks down the IPR process and suggests basic strategies for challengers and patent owners.

Explore in-depth analysis, original research, and guides on the developing procedures for challenging the validity of a patent granted by the U.S. Patent and Trademark Office. 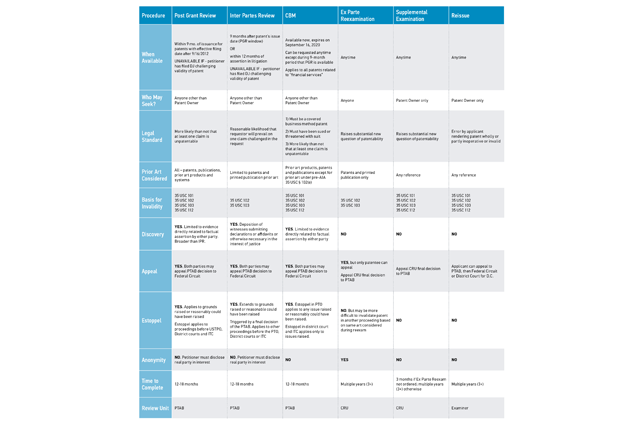 Perkins Coie’s post-issuance procedure matrix is a comprehensive overview of key factors to consider when evaluating which post-grant procedure is the best fit for your matter.