The Bureau of Ocean Energy Management (BOEM) released its final sale notice (FSN) for two lease areas totaling 110,091 acres in the Carolina Long Bay Area on March 25, 2022. The auction for these lease areas will be held virtually on May 11, 2022. The lease sale follows the unprecedented auction of six lease areas in the New York Bight, which brought in $4.37 billion to the U.S. Department of the Treasury. According to the U.S. Department of the Interior’s announcement, if developed, the Carolina Long Bay leases could result in at least 1.3 gigawatts of offshore wind energy—enough to power nearly 500,000 homes.

As set forth in the FSN and supporting the decision memorandum, BOEM will auction two lease areas of approximately equal size more than 20 miles offshore from Bald Head Island, North Carolina. Sixteen bidders qualified to participate in the auction. In contrast to the New York Bight sale, which used a purely monetary cost-ascending format, BOEM will utilize a multiple-factor auction that will credit bidders for financial commitments to an offshore wind workforce training program or to the development of an offshore wind domestic supply chain. BOEM will also allow a bidder to bid for both lease areas. Major provisions of the FSN follow below.

Responding to public comments to the proposed sale notice (PSN), BOEM reduced the proposed Wind Energy Areas (WEAs) by 14% to 110,091 acres. To minimize potential visual impact, BOEM removed all lease blocks within 20 miles of the shoreline, which eliminated 13,474 acres from the northern portion of the lease sites. BOEM further removed 4,300 acres from the southeast portion of the proposed lease area to eliminate conflicts with a shipping safety fairway under consideration by the U.S. Coast Guard.

The size of the current lease areas is as follows: 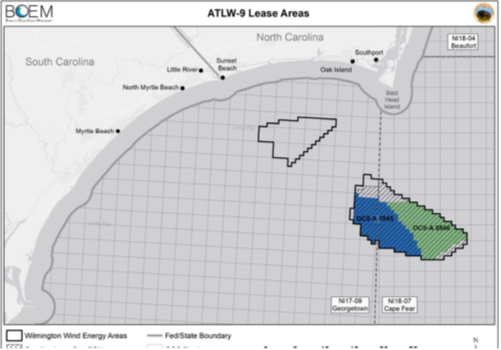 BOEM has determined that the lease area could support two separate commercially viable areas or one larger commercial project and therefore is “allowing bidders to win one or both areas in the auction to allow for a balance between competitive and economic benefits, and the desire to utilize economies of scale.”

For the first time since 2016, BOEM will use a multiple-factor auction format with a multiple-factor bidding system with a combination of a monetary (cash) and nonmonetary factors that will serve as bidding credits in the sale. As noted in the decision memorandum for the FSN, BOEM’s goals in this lease auction are “to convey renewable energy leases to entities most likely to successfully develop the wind resources and ... comply with the statutory requirement to obtain a fair return on leased acreage.” The memorandum explains that multiple-factor auction formats “allow BOEM to balance fair return on leased acreage while incentivizing initiatives that will aid in the expeditious and orderly development of the Outer Continental Shelf or other priorities under BOEM's statutory requirements.”

BOEM will give a qualifying bidder a credit of 20% of its cash bid in exchange for committing to make a qualifying monetary contribution to programs or initiatives that support workforce training programs for the offshore wind industry, development of a U.S. domestic supply chain for the offshore wind energy industry, or both. To qualify, the winning bidder is required to financially contribute at least 80% of its bidding credit toward a workforce training program or development of a domestic supply chain. The credit “must result in a more robust domestic supply chain by reducing the upfront capital or certification cost for manufacturing offshore wind components including the building of facilities, the purchasing of capital equipment, and the certifying of existing manufacturing facilities.” The credit would apply to both lease areas if a bidder who is qualified for the credit wins both lease areas.

Bidders must indicate their interest in the bidding credit and include a conceptual strategy for meeting the credit requirements in the bidders’ financial form and the bidders’ form addendum in advance of the lease, along with a bid deposit for one or both leases. BOEM’s decision memorandum states that these strategies “shall describe objective, quantifiable, and verifiable steps that would allow BOEM to confirm compliance with the bidding credit when the documentation is submitted.” A BOEM panel will review the bidders’ nonmonetary component after bid deposits have been received and notify bidders if they qualify for the credit prior to the auction.

Criteria for the nonmonetary factors include the following:

Finally, the bidder’s documentation “demonstrating payment of the full commitment must be provided to BOEM no later than the date in which the first [Facility Design Report] for the project is submitted to BOEM.” The documentation must include all written agreements between the lessee and beneficiaries of the contribution, among others, and must “contain the information called for in the conceptual Strategy submitted at the time of the bid deposit to allow BOEM to confirm compliance with the bidding credit criteria.”

As set forth in the lease, the purpose of this requirement, in part, is to “improve Lessee communication and transparency with affected Tribes, parties, and members of the public, and to encourage lessees to identify and engage with underserved communities, including environmental justice communities that may be disproportionately impacted by a project’s OCS activities, in order to avoid, minimize, and mitigate potential adverse effects by, for example, investing in these communities.”

BOEM has indicated that future lease sales, including the auction scheduled later this year in California, will follow a format broadly consistent to prior lease sales. It remains to be seen, however, how an auction where bidders receive credits for promises of future performance will affect the ultimate return to the Treasury and meet BOEM’s stated goal of conveying leases to the entities most likely to successfully develop the wind resource.